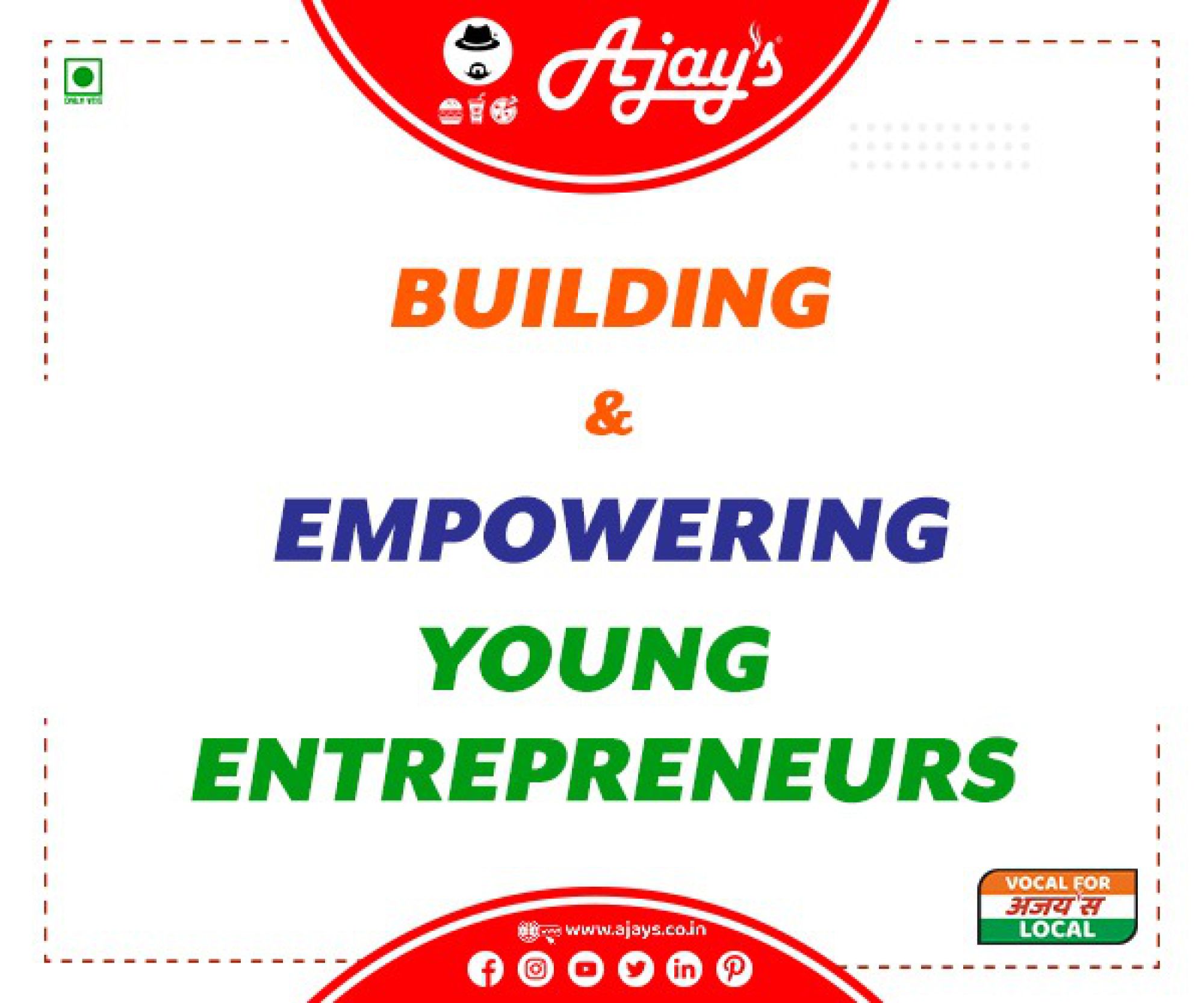 External Link to the Blog

Our population is about to cross 1.4 billion and believe me, a whooping 65% below the age of 35. Eliminating the age group of 0-18, that is approximately 40%, the Young India comprises of 25% of the Population and this statistic makes me really proud. A task force of over 35 crores that can make wonders to the Economy of this country. The Future of any country is the Youth Power it has and we have it in abundance.

Statistics further reveal that the level at which youth entrepreneurs in India innovate is the highest in the Asia and the Pacific region, as per a recent survey by Global Entrepreneurship Monitor (GEM) and Youth Co:Lab. Around 55 percent of Total Early-stage Entrepreneurial Activity (TEA) showed innovation-orientation for entering new markets, introducing new products, services or processes that are unique to market, reveals the study.

Hon’ble Prime Minister Shri Narendra Modi instituted the Ministry for Skill Development and Entrepreneurship with the vision to harness the power of our youth by making them skilled and empowering them to not only become self-employed but create jobs for others also. According to statistics, 65% of our population is under the age of 35 and close to 15 million enter the workforce every year. The only way through which enough jobs can be created for such a huge populous, consistently, is by creating an environment for entrepreneurship and innovation.

At Ajay’s, we envision to be the ones who shall empower the youth of the country by way of creating opportunities to excel and create value for oneself and others. Ajay’s is one of the Fastest growing Chain of Quick Service restaurants. Established in August 2014, Ajay’s started franchising its Fast Food QSR in late 2018 and by March 2020 they had grown their stores to 21 outlets in South Gujarat. However, pandemic took a toll on the food industry and Ajay’s was also amongst those who took the beating. Operations begun in June 2020 after partial reopening and there were only 13 stores left.

It was a learning and a leap of faith, the young entrepreneurs at Ajay’s now restructured the business and within 15 months added 70 new stores taking the total count to 82 outlets as on 18th September 2021.

The vision to serve food that is good, affordable and accessible to all the Team Ajay’s is innovating new ways to do business in the Fast-Food Industry. They deployed backward integration to develop food products, recipes, processes and a robust Supply Chain to cater to the growing market.

While all this was being done, Ajay’s Management was focused to infuse young blood in the system, right from the Employees, Channel Partners to the appointed Franchise. Interestingly out of the 82 Franchise Owners, 54 owners are the age group of 18-35 years, that’s a huge pie of 67%. Amongst the balance 23 owners fall between the age group of 36-45, that adds up to the total by 28%. Hence effectively, 95% of Ajay’s Franchise fall below the age group of 18-45 years.

Now this is what we call “Empowering the Youth”. Ajay’s has shown them a way of doing a Fast Food business successfully. Ajay’s wants its Franchisee to focus on doing Business at their outlets and not worry about the petty and trivial things like raw material sourcing, making store processes, Software for outlet, training etc. They want the franchisee to implement the basics of Business that are shared with them during the training. The business has some inherent strengths that makes the Ajay’s franchisee a very lucrative and an undisputed successful option. A few pathbreaking and industry first features of the franchise business are enumerated as below,

After studying the Ajay’s Franchise model, and their ideology of what the Franchisee has to do becomes more load and clear. A study of their top successful Franchise reveals that they are ones who have really followed the Training and have been acting as per the Ajay’s Systems and yes, they undoubtedly are the Young Guns.

The philosophy of empowering and building the youth has been in the Indian Culture and has been taken along effectively by Ajay’s. The wall of fame is proud to flaunt the success chronicle of the Ajay’s Young Franchise Team, 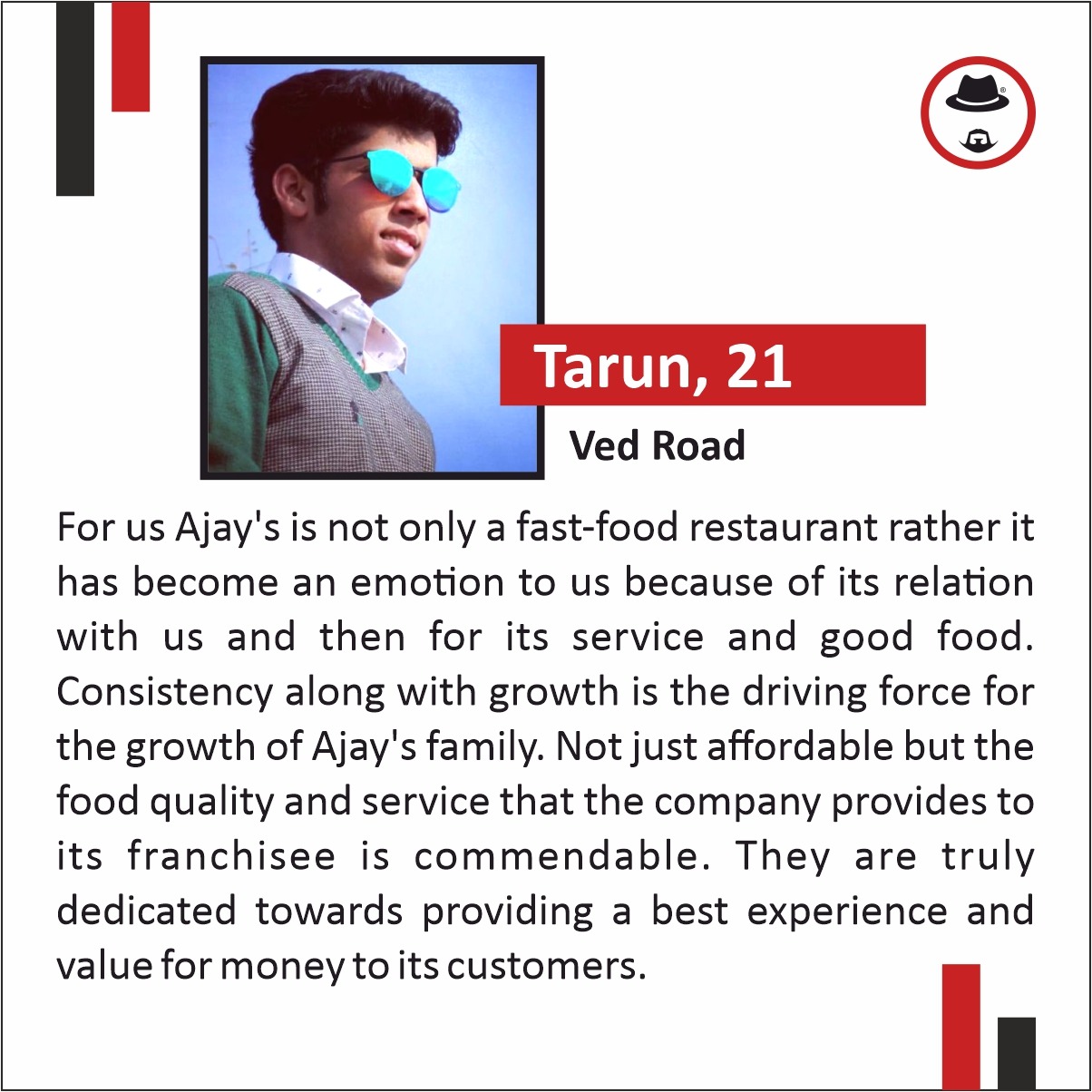 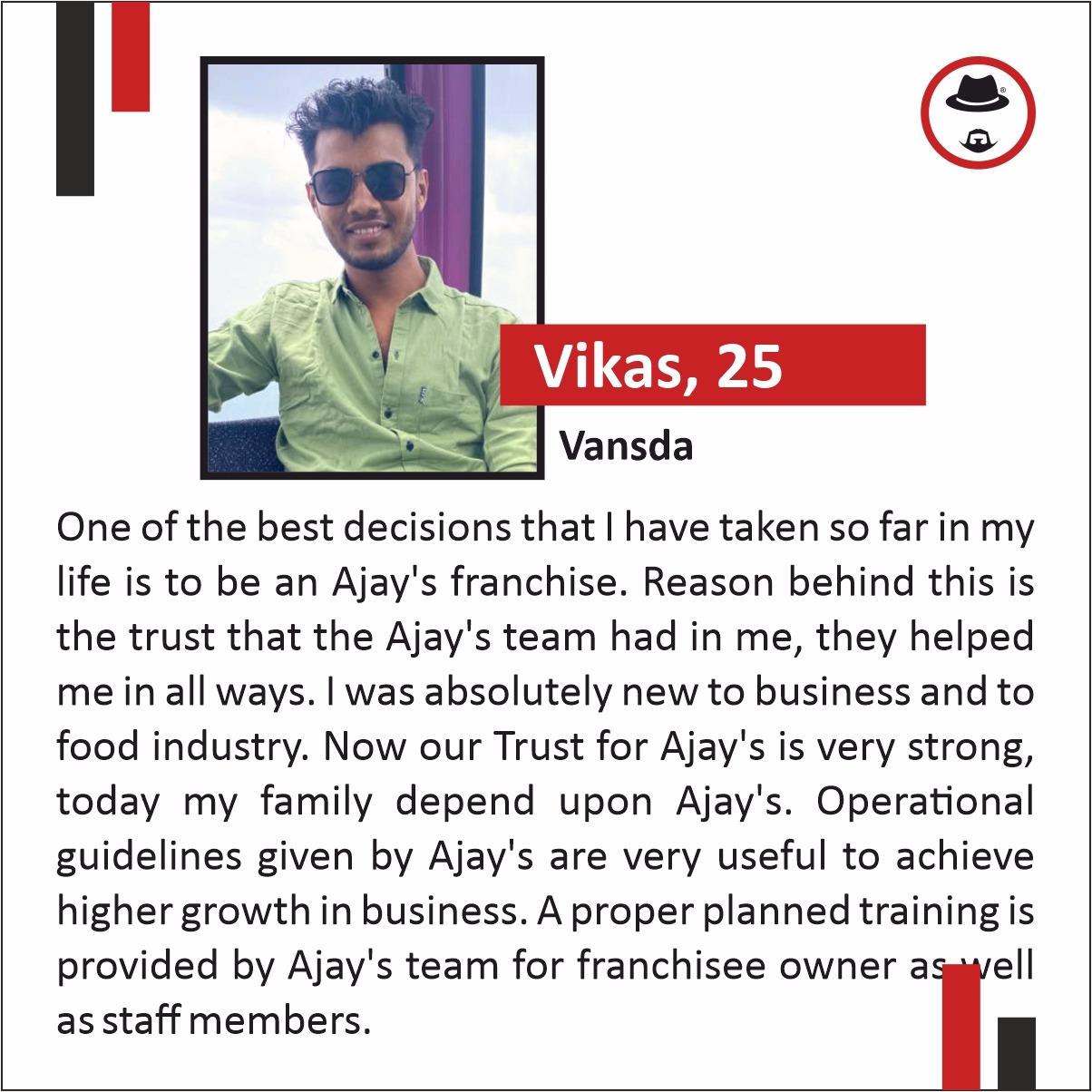 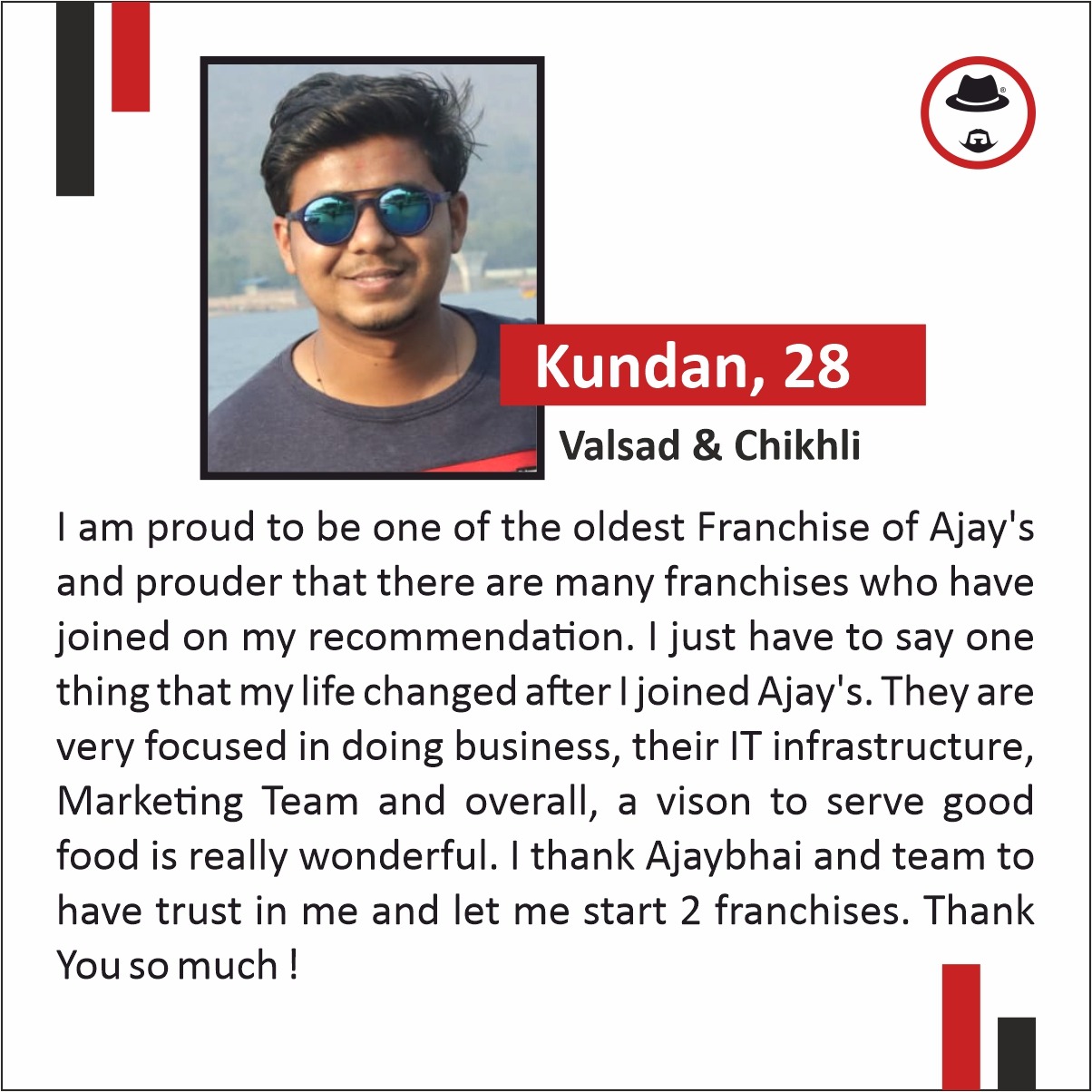 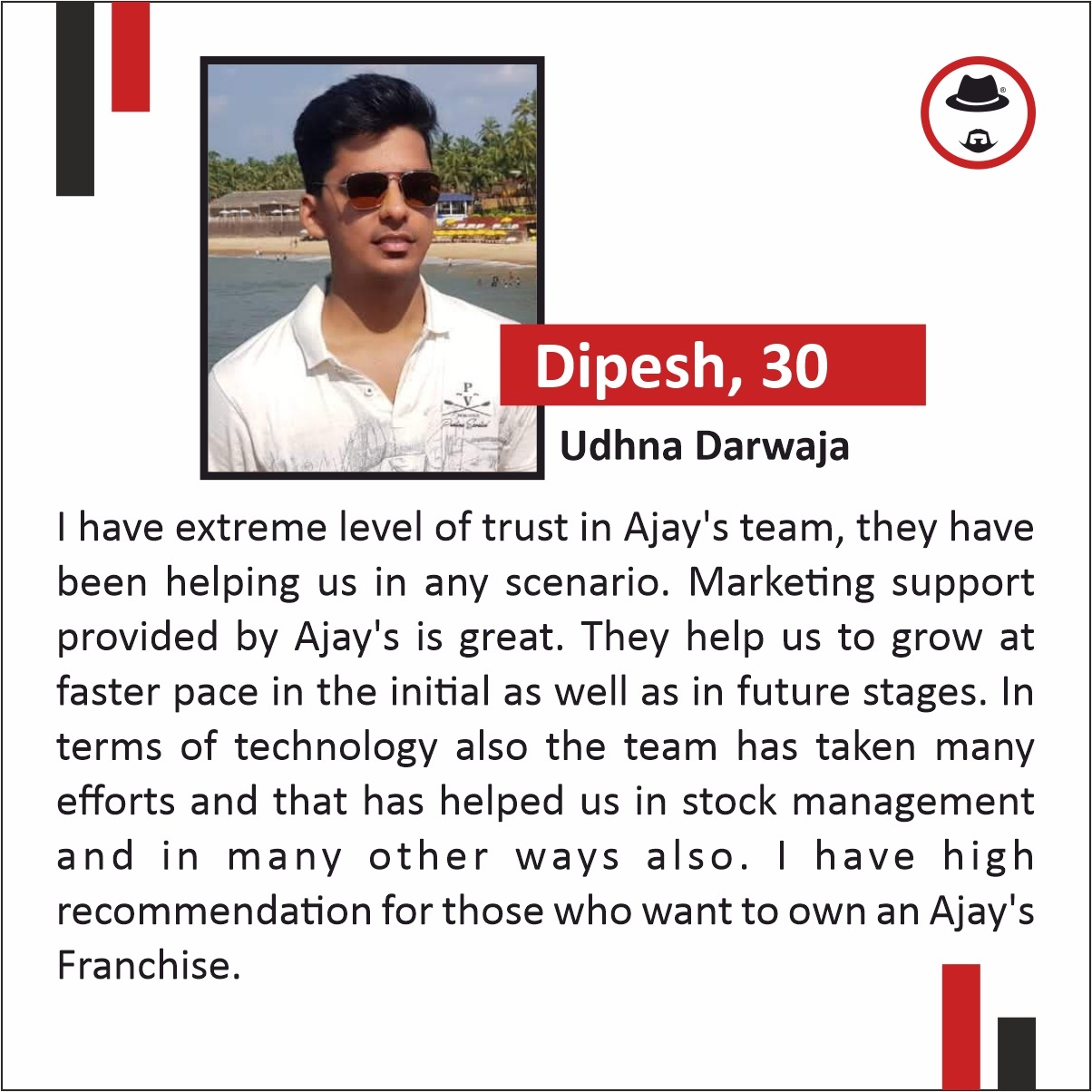 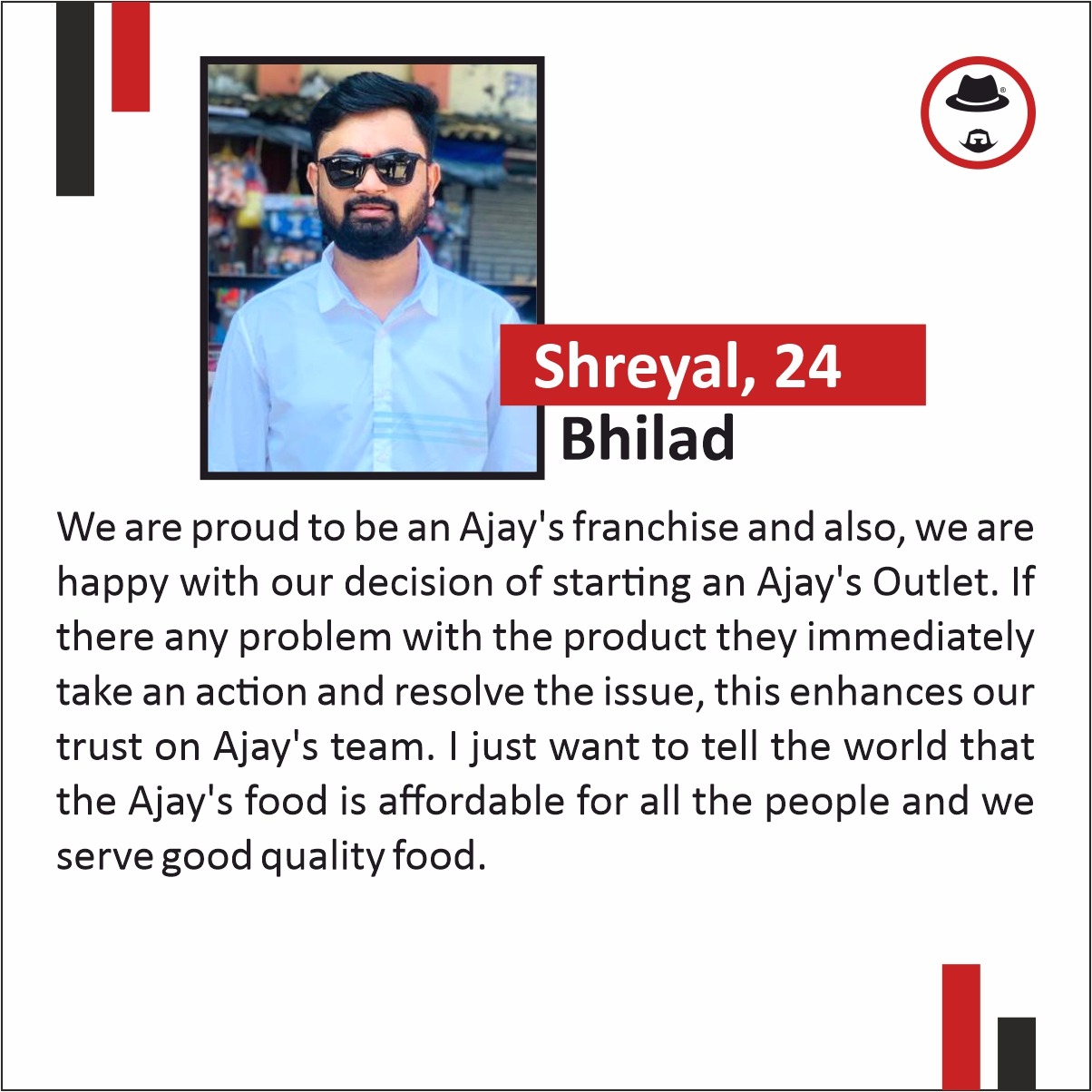 As rightly said by one of the Founder, “Together We Grow” and the same is reflected in the ideology of the organisation. They leave no stone unturned when it comes to Innovation, Customer Satisfaction. The team may not have a formal research and development team but all that is done at the management level is based on a concrete data, which is a forte at Ajay’s.

When opportunity knocks at the doors, embrace it with both the hands, don’t be the one who missed the bus. Ajay’s Franchise are coming up at an unprecedented pace across South and Central Gujarat. Don’t miss the chance to taste success. Be the Empowered, be the one who is pride of the family, honour of the nation. Come Join the Ajay’s Franchise Team, you won’t regret.

At Ajay’s we believe in providing GOOD FOOD FOR ALL. Join us in this effort in making Good Food available to all at affordable prices. In case you have any complaints regarding our products and services, please feel free to write us at ajay@ajays.co.in, we shall be happy to help.